Over recent years so many articles have been written in industry journals by very experienced engineers and fire industry experts, regarding the best solutions for ‘fire systems’ for data centres. These ‘fire systems’ would generally comprise of some form of early warning detection system, often complemented by point type smoke detection together with one of the many options of fire suppression/extinguishing solutions, for critical data hall areas.

These articles often go on to explain about the many different fire scenarios that can take place within data centre applications and fully justify the whole concept of the complete ‘fire system’.

However, of all the fire scenarios for data centre applications probably the most significant aspect of these ‘fire systems’ is the need for Early Warning Detection! This cannot be understated.

There are over 7,500 data centres around the world, and it is imperative that these Data Centres utilise the correct and the best Very Early Warning Fire Detection (VEWFD) system technologies. This requirement is to reduce the potential of business disruption, equipment damage or even catastrophic loss from a fire. It is reported that the estimated cost of a typical data centre outage is around $11,000 US dollars per minute, and in many data centre applications the costs can be significantly higher than this.

We should be under no illusions; the potential risk of fire is very real. There are often thousands of closely packed heat-generating items of equipment, kilometres of electrical cable and many combustible plastics typically found in data centre buildings.

Approximately one third of all unscheduled data centre outages are caused by thermal issues with the main causes being from overheating and electrical faults. Therefore, the prime objective is to maintain the operation of the critical infrastructure as fire events and/or even false alarms can have extensive implications.

Cloud Chamber Detection (CCD) identifies the phenomenon of invisible combustion particles generated as a material begins to overheat (incipient stage). This overheating can take a significant time period to develop, minutes or sometimes many hours, BEFORE SMOKE. Cloud Chamber Detection (CCD) is therefore THE EARLIEST technology detecting the first fire phenomenon and can provide warning of overheat conditions that could lead to a more serious fire condition.

However, there is no need to simply take the above claim from the product manufacturer. Why not take it from a genuinely independent analysis of the detector performance capabilities from all the major commercially available high sensitivity detectors for early warning, for critical areas?

A short number of years ago the United States NRC Office of Nuclear Regulatory Research (RES) decided the test data for ‘Incipient Fire Detection Systems’ in Nuclear Power Plant applications was too limited. Specifically, data on the detection of slowly developing, incipient stage, pre-flaming conditions was not readily available. Therefore, a research program was needed.

Funded by the NRC Office, the National Institute of Standards & Technology (NIST) were tasked with ‘Determining the Effectiveness, Limitations, and Operator Response for Very Early Warning Fire Detection (VEWFD) systems  in Nuclear Facilities’ (NUREG-2180 Issue 0), for their most critical and high-risk applications. More importantly, this has become the most up-to-date, truly independent, assessment of Very Early Warning Fire Detection System Technologies, as no manufacturers could assist (or influence) the testing.

Essentially, the conclusions for this 3-year task was that Cloud Chamber detectors responded successfully to more tests than any other technologies and most significantly responded quicker in almost all the many tests carried out, sometimes up to 12 minutes earlier.

On the basis that particles detected by the Cloud Chamber are invisible, one of the simplest ways to describe the phenomenon detected by this is to explain that most, if not all of us, have experienced the smell of these particles. When you enter a room and your nose can sense the very distinctive smell of something, usually electrical, burning, then this smell is the invisible combustion particles from some material that is overheating, not hot, overheating! At this point there may be NO SMOKE.

Another easily relatable scenario for these invisible particles is when you purchase a new electrical heater and switch it on dust on the electrical elements is burnt off, this create a similar distinctive smell which is sensed by your nose, however there may be nothing to see with your eyes – NO SMOKE.

Smoke can and does cause damage. Figures released in the US suggest that 95% of the damage in a typical data centre fire is not caused by the fire itself but by smoke from PVC and digital circuit boards, which can have a highly corrosive effect on electronic equipment in the localised area.

This is the equivalent of having a human nose and eyes protecting your critical area 24/7.

So, having established that the Cloud Chamber is the EARLIEST form of detection for data centre applications where hopefully the identification of an incipient fire can provide time to take corrective action, what about the scenario where the fire could propagate at a more rapid pace.

This would generally be catered for by the initiation of a suppression/extinguishing system. It is very well known that Optical aspirating detection systems or Optical point type smoke detectors can, and do, false alarm from, let’s say, things that are not smoke! The result of this can be an unwanted release of the suppression/extinguishing agent and all the chaos and costs that would come with this. Protec Cirrus HYBRID has a robust solution for this.

Many of the features detailed above (and many that aren’t) of the Protec Cirrus HYBRID Aspirating Fire & Smoke Detector are totally unique to this product within the global aspirating detector industry. One reason for this is “not all fires are the same” and as this article hopefully shows not all detectors are either.

The Cloud Chamber detector identifies invisible sub-micron particles generated during the combustion process when an overheating occurs. The cloud chamber measurement scale is in particles per cm³ (PPCC) and provides the ‘’ detection element of the Cirrus HYBRID detector.

Cirrus HYBRID detectors indicate the two separate detection element scales (PPCC & %Obs/m), however, as its primary display these two scales are combined and are referenced on a bespoke scale known as Combined Fire and Smoke (CFS). 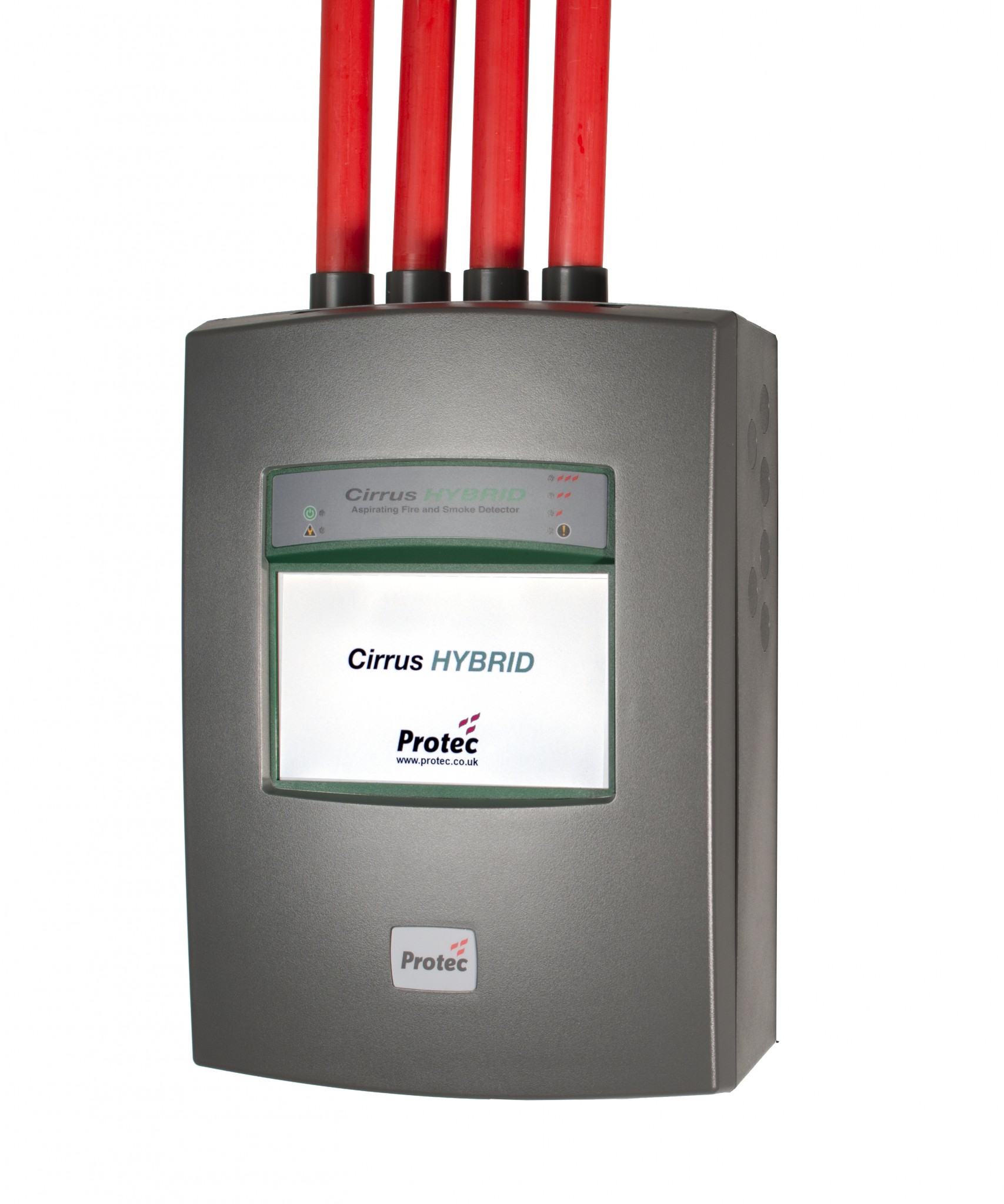