The Problems caused by Corrosion and the Pollution of Coil Blocks on HVAC Plant in Data Centres.

Corrosion is widely accepted to be the main cause of early deterioration in heat exchanger coils, traditionally the most vulnerable part of airside HVAC equipment.

Corrosion will continue until the performance of the heat exchanger fails to meet the stated requirements. The overall result of the corrosion is the eventual decrease in capacity and consequents increase in energy consumption. The two most common forms of corrosion occurring in HVAC equipment are known as ‘galvanic corrosion’ and ‘climate impact corrosion’. Both of these can lead to equipment failure. Sealing heat exchangers surfaces from the environment will either delay corrosive process or prevent them from occurring in the first place, this being dependent upon the operating environment.

Blygold are world leaders in the field of Anti-Corrosion/Anti Bacterial coatings for air-conditioning systems and Air Handling Units. The first protective coating, Blygold Tropic was successfully introduced in Holland Rijk Bleijenberg in 1985 and since then many other products have been added to our portfolio.

Blygold PolAl is an anti-corrosion treatment consisting of a conversion layer followed by a polyurethane (impregnated with Aluminium) top coat. The operating temperature range is from -20°c to 150°c. There is no loss of heat transfer performance and there is only a minimum change in pressure drop. The Blygold treatment is applied to cooling and DX coils, but can also be applied to run round coils, heating coils and heat pipes. Areas of application may include: – swimming pools, industrial, medical, process, coastal areas etc.

Blygold now operate in over 57 countries throughout the world and is recognised as the Brand Leader in Heat Exchanger Post Coat Protection and the renovation of Air Handling Equipment.

Preventing and Correcting the corrosive impact at technical installations. 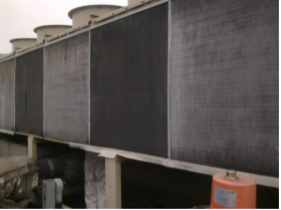 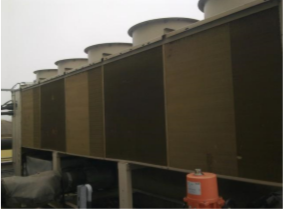 Heat exchangers are subject to sever corrosion because of their construction, which usually combines dissimilar metals and because of the volume of polluted air passing through them. Corrosion and pollution of heat exchangers will directly affect the performance of the air conditioning system. The heat exchanger must be sealed off from the environment in a manner that will not reduce its heat transfer or cause a pressure drop. When this is accomplished, the cooling capacity will remain intact and energy consumption can be controlled.

The Blygold PolAl XT coating provides a long lasting corrosion protection to heat exchangers, without affecting heat transfer and pressure drop. The system can be applied in the factory as well as on-site. The heat conductive pigmentation in the coating is oriented in such a way that it creates a very high chemical resistance at a low layer thickness. In combination with the unique application procedures, the PoluAl XT is the best available option to prevent air conditioning failure and unnecessary energy consumption.

Blygold Coating extends the life time of the Heat Exchanger and will control cooling capacity and energy consumption.

Air conditioning data systems keep data centres cool. Without cool data centres rooms get too hot, lose efficiency and/or stops working. When that happens business lose money, they pay out more money in the rising cost of the energy to power their data centres and they have the onus to reduce carbon emissions. Data centres need their HVAC equipment to be the most efficient it can be, Don’t just crank the thermostat down, address the issue of corroded/dirty coil blocks!

Malfunctioning data centre cooling systems account for around 30 per cent of their downtime. Between 35% and 50% of the energy costs of a data centre derive from its cooling costs. It has been suggested that Data Centre carbon dioxide emissions are down to keep data centres cool. Energy savings need to be maximised. When energy costs are so high and continue to rise, keeping energy costs as low as possible is paramaount, which is highlighted by the fact that keeping a data centre cool equates to 40 and 45%of its overall costs. Given that data centres run 24 hours a day, 365 days a year, most operators use mechanical cooling when it’s not cool enough outside. Studies have shown that the cooling systems account for nearly a third of data centre downtime from heat related breakdowns.

Significant Energy Savings have been recorded with a ROI of less than 12 months.

A company used Blygold in a test study carried out at their facility in Ware Hertfordshire: 3 HT York Chillers were treated on Building 5 and their performance monitored before and after. The power usage dropped by 25 to 30 amps per phase, which equated to a 10-15% power drop whilst running on full duty. Pay back was less than 6 months.

As part of an energy saving initiative, Blygold were invited to do a test in Maidenhead to quantify energy savings. Three chillers were deep cleaned and coated:

Calculated Energy Savings predicted on the Com Chillers, the York Chiller and the Carrier Chiller, are in excess of £23,000 and the annual carbon dioxide saving will be in excess of 108,695 kg.

The cost to do the work was £5,610 giving a ROI of less than 6 months in energy saving alone, without taking into account the extension of lifetime, the reduction in maintenance, or early replacement.

As a result of the improvement in performance and the significant energy savings achieved, the site in Maidenhead  have had a further number of chillers and condensing units treated. They have not worked out yet the additional saving in reduced maintenance, reduced call outs and the extension in the life of their units, As a result of this work Blygold have been specified worldwide on all their sites.

Runners Up in the RAC Awards 2009, the CIBSE Awards 2010 and 2011, for ENERGY SAVING PERFORMANCE and Nominated by the NHS in Scotland for an ENERGY SAVING Award at the H & V Awards 2013

In 2012 Blygold deep cleaned and Blygold treated a York Chiller in Dungarvan Ireland resulting in a 20% saving. The cost to deep clean and treat the York Chiller was £5577 with a mobilisation fee of £600. Based on a saving of 265455 KWH at full load, the annual carbon dioxide saving will be in excess of 114,146kg.

Herewith is a brief overview of a case study carried out on a York Chiller at a Technical Transmission Station in Hayes Middlesex (server rooms, transmissions rooms etc) The unit was deep cleaned inside and out before the test was  carried out, so we only had independent test results. After the unit was deep cleaned and after the unit was Blygold Coated. The effect of the Blygold Coating on the York YCAJ76 Chiller was:

The Results Speak for Themselves.

Blygold (UK) Ltd was set up in 2000 and is a fully accredited Blygold International Partner.

Blygold (UK) Ltd have Office and Spray Facilities in the following Locations:

The Results Speak for Themselves-Return on Investment within 12 months